Iowa football began as a club sport in 1872 and football games were played against other schools beginning in 1882, but it was not until 1889 that football became an official varsity sport at the University of Iowa. The Hawkeyes joined the Big Ten Conference in 1900. Since then, the Hawkeyes have won 11 Big Ten championships and have played in 28 bowl games. 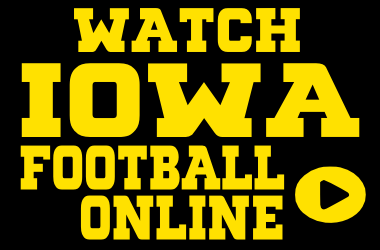 The official site of Iowa Hawkeye Athletics is HawkeyeSports.com.

The official site for Iowa Hawkeye football is GoHawks.com.

The home of the Iowa Hawkeyes football team is Kinnick Stadium. The stadium opened in 1929 and has since grown to an official capacity of 70,585.

Get access to all Big Ten football games, highlights, and replays on the Big Ten Network. Find out where you can watch Iowa football online at Watch Big Ten Football Online. Big Ten Online is the best place to watch the Iowa football game online.

The most popular sports message board forums for Iowa Hawkeyes Football are Hawk Central, Hawkeye Report, and Hawkeye Insider, a member of the Scout.com network.

There are many Iowa Newspapers that cover Hawkeye Football locally. A short list of the most popular is:
Daily Iowan…Official University of Iowa student newspaper.
Hawk Central…Iowa Football coverage from the Iowa City Press Citizen.
Hawkmania…Quad City Times coverage of Iowa Football.

KRUI is the student run radio station of the University of Iowa. Listen to Iowa Hawkeyes football streams online live.