Hey Huskers fans! Welcome to our database of the official digital media providers of University of Nebraska Athletics. Our manually compiled listings of the official Huskers websites help show the fans where to watch Nebraska football online legally.

Safely find out where to watch the Nebraska football game online on any connected device, any time of day, wherever happen to be. Come on in and let us help you find the Nebraska sporting event you are looking for.

Just below are our listings of the official digital streaming media partners of University of Nebraska Athletics. Go through our collection and you’ll find out how to listen live and watch Nebraska football games legally online on any device:

We don’t host illegal Nebraska football live streams here or post any type of live game link other than to the official streaming media partners of the University of Nebraska. You’ll want to bookmark Big Ten Football Online to get the legal and official live streaming football game links for each Big Ten Conference school in one handy website. 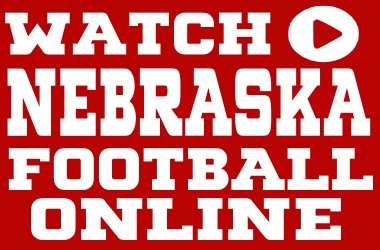 Get local Huskers Sports Network live commentary and coverage of Nebraska athletics wherever you live. NU fans can watch Nebraska football games online through BTN2Go. All of the Cornhuskers football games are televised live on ESPN, FOX, ABC and the Big Ten Network each week of the season.

And, for Huskers fans abroad, Nebraska BTN2Go International is the official streaming provider of Nebraska football games online for those residing outside of the country.

Get unprecedented, behind the scenes action, VIP access, and local coverage of all University of Nebraska sporting events at Huskers.com. We monitor all the sites that broadcast Cornhuskers football, basketball, baseball, even volleyball and more online. Watch the Huskers game on your computer or mobile phone today.

The Nebraska Cornhuskers began playing varsity football in 1890 and evolved into one of the most dominant programs in college football. The Cornhuskers have won five national titles and forty three conference championships in their storied existence.

Nebraska and the University of Iowa meet in the last football game of the Big Ten Conference regular season and compete for the Heroes Trophy, a renewed traveling trophy rivalry game that is sure to become a classic.

Visit Big Ten Football Online to find out where you can watch the Nebraska Cornhuskers football games online this season. Get the schedule, date, time and channel for all Huskers football and basketball games.