Guess who’s been invited to join the oldest football conference? That’s right. USC Trojans football is coming to the B1G.

The Trojans are a football powerhouse and have been throughout NCAA history, claiming 11 national championships. The USC football team is the centerpiece of an athletic program that has won more NCAA men’s individual and men’s team titles than any other collegiate athletic program. 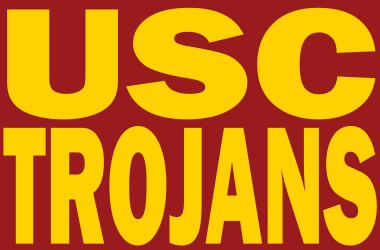 USC was founded in 1880, making it California’s oldest private research university. The enrollment is at USC is nearly 34,000. Visit the official USC website at USC.edu.

We show the fans how to watch USC football online at Big Ten Football Online.

Traveler is the official University of Southern California mascot. View pictures of Traveler and history of the USC mascot at USC Trojans Mascot and Traditions.

Find USC Trojans wallpaper and layouts for your PC or phone at USC Football Wallpaper Online.

Fight On is the official University of Southern California Fight Song. View this fight song and get USC Ringtones at USC Trojans Fight Song Ringtones.

The most popular sports message board forums for USC Football are the Peristyle, Trojan Football Forum and the SC Playbook forum.

There are many daily updated and in-depth fan sites and blogs covering the University of Southern California Football Team. The most widely visited USC Football websites are:

There are many Los Angeles Newspapers that cover USC Football locally. A short list of the most popular is: