Few schools draw the attention of a national audience like the USC Trojans and the University of Southern California joining the B1G is big news for Big Ten football fans! We show folks how to get B1G football games on any connected device. So, if you’re looking for the Trojans game then you’ve come to the right place, we’ll show you where to watch USC football online fast.

Safely find out where to watch the USC football game online on any of your devices, any time of day, wherever you happen to be. Come on in and let us help you find the USC Trojans Athletic events you are looking for whether its on your TV, phone or computer.

Following are our listings of the official digital streaming media partners of University of Southern California Athletics. Browse our collection and you’ll find out how to listen live and watch the USC Trojans football games legally online:

We do not host Southern Cal football live streams here or post any type of live game link other than to the official streaming media partners of the University of Southern California. You’ll want to bookmark Big Ten Football Online to get the legal and official live streaming football game links for each Big Ten Conference school in one place. 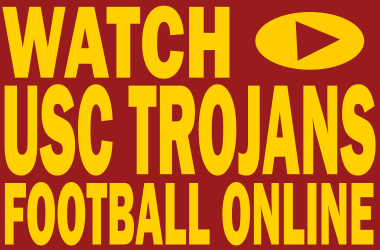 Get local Southern California Sports Network live commentary and coverage of USC sports wherever you live. Fans can watch USC Trojans football games online with a subscription to BTN2Go. In addition, all USC football games are televised live on ESPN, FOX, ABC and the Big Ten Network each week of the season.

Get the most live and behind the scenes action, MVP access, and local coverage of all University of Southern California athletics events at USCTrojans.com. We monitor all the sites that broadcast live USC Trojans football, basketball, baseball, even volleyball and lacrosse online. Watch the Trojans game on your computer, phone, Roku, smart TV, PS5 – any device connected to the Internet.

The USC Trojans began playing varsity football in 1888. The Trojans nickname was first used in 1912 and the teams were called the Fighting Methodists before the Trojan name stuck. The Trojan name came about because of the hardships and handicaps undertaken by the coaches and players during those early seasons.

Learn more about USC football facts and trivia here. If you need USC ringtones or USC football wallpaper we have that, too. The home of the USC Trojans football team is the LA Coliseum and we have a seating chart of the USC football stadium there.

Visit Big Ten Football Online to find out where you can watch the USC Trojans football games online this season. Get the schedule, date, time and channel for all Trojan football and basketball games.